The clash of steel, the roar of guns, and the zealous fury of barked orders ring out whenever Star Trader Captains choose to or are forced to face their enemies in Crew Combat. In an up close and personal fight, the opposing sides risk life and limb to outmaneuver and outgun the other.

Crew Combat is a fight between two teams of 4, fielded whenever the Captain boards an enemy or is boarded themselves, whenever hostile Pirates, Scavengers, or worse happen upon an Explorer's expedition, when a Bounty Hunter kicks down the doors of a fugitive's hideout, or when opposing interests decide to intervene in a hand-off of goods. No matter how Crew Combat starts, it always ends one way: with one side victorious and the other driven away or dead.

At the beginning of a Crew Combat encounter, your 4 combatants must be selected. Each crew member will have a preferred slot to operate at, depending on their weapon, Talents, and Job. When selected, the combatant will automatically placed in their preferred slot, though they can be moved from this slot to another using the arrows on either side of the combatant. All Crew without combat related jobs will be filtered out of this screen by default. Officers are always considered combat capable, even if they do not have ranks in a combat job. If you do not have enough fighters or Officers to fill the ranks, random non-combat crew will be selected to fill the gaps. If you plan to engage in a lot of crew combat, especially multiple boarding attempts, it is recommended to have extra fighters.

At the beginning of a combat round, every character in the combat rolls their Initiative. Characters will then act in order from highest Initiative to lowest Initiative and may take one action on their turn.

Initiative is rolled as:

A boarding action has begun, and the raid will be quick and deadly 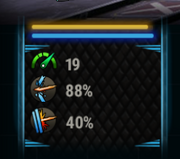 Be aware that a character can reduce their Initiative below 0 by using their Talents. If Initiative drops below and including -10 however, the character will suffer a penalty to the next turn's Initiative roll, forcing them to act later and with fewer actions. Specifically, characters with penalized turns will start the combat round with at most 8 initiative.

Each combatant has a set amount of Hit Points (HP), and Morale Points (MP). HP and MP are both damaged by attacks, with MP taking more severe damage as the number of turns increases. HP and MP can be restored by certain Talents, such as the Combat Medic's E-Suture.

When a combatant's HP drops to 0, they are defeated and removed from the fight, also forcing a Death Save. Any crew that were behind them move up automatically to fill the gap. If all combatants are defeated, then that side loses the battle and is forced to withdraw.

Once characters pass below 40 Morale, they have a chance of skipping their turn by draining 12 initiative in a Morale Break.

The chance of a Morale Break is rolled on as D100 against the following value: 25 + (40 - Morale). Therefore, as a character drops below 40 toward 0, their chance of breaking increases from 26% to 65%. A character with 0 Morale may be near paralyzed in combat. Certain Traits, like Fearless or simply being a Xeno, can make characters immune to Morale Breaks.

A combatant's weapon is their main source of damage in combat. Different Job types specialize in different weapon types, with Soldiers and Bounty Hunters specializing in Rifles, while Combat Medics and Spies make use of Pistols, and Swordsmen fight up close with Blades. Each weapon provides a basic attack Talent that functions at the weapon's base range, and does not have any additional effects. Rifle Talents tend to focus on the backline working at slots 4 and 3, while some Soldier Talents focus on using Snubbers at slots 1 and 2. Pistols work from slots 1 to 3, with Pistol related Talents also working at those slots. Blades and Blade Talents work only at slots 1 and 2.

Combat related Jobs provide Talents that, like weapons, operate at different slots. These Talents can be special attacks, team or individual buffs, or crippling debuffs for the enemy. Some Jobs, like Soldiers, focus on consistent damage output, with some debuffs and buffs included. Others, such as the Combat Medic, focus on healing and supporting their comrades while crippling the enemy.

In crew combat, you have the option to Surrender at any time. Your combat crew will lay down their weapons and combat ends immediately. Your surviving combat crew are at the mercy of your enemy and their type and your Reputation with them will determine how many are dealt fatal wounds or given mercy. For example, xeno will deal a death blow to every survivor, which will fall back on their Death Save. If you have low Reputation with a human enemy, you'll see more death blows but positive Reputation, Rank and Edict can reduce the chance of death blows as low as 25%.

Whenever taking an action in crew combat, a crew member uses their own individual Skills, Attributes and other scores. Dice pools in crew combat are never modified by the ship's Skill Pools. However, in combat all characters use their Skill Bonuses for any combat Skill.

Some Talents can leave lingering effects on characters, both positive and negative. From corrosive and toxic Bio-Poison to Spies vanishing into the shadows, status effects can change the flow of a battle. Individual Talents can also apply specific buffs and debuffs to individuals or multiple characters.

A catch-all term for a variety of poisons and toxins, Bio-Poison is applied as part of a successful attack, typically by Combat Medics or Exo-Scouts. This status effect is a drain on HP each round, the severity of which is determined by the Talent. At the start of each combat round, the affected character will lose HP. This damage ignores armor and if it drops a character's HP below 1 point, it will kill them. Bio-Poison is resisted by Bio-Poison Resist. Bio-Poison resist is rolled as a Big Die and subtracted from incoming bio-poison damage. Mechanical foes are immune to bio-poison damage. Bio-Poison damage itself is rolled as a weighted die.

From lacerations to internal bleeding, the Bleed status effect deals damage at the start of each character's individual turn, not once per round like Bio-Poison. It tends to deal less damage per application to compensate for potentially triggering many times in a combat round. This status effect is typically applied by Zealots, Shock Troopers, and Bounty Hunters. This damage ignores armor. Bleeding damage is resisted by Bleed Resist. Bleed resist reduces incoming bleeding damage as a big die (roll from 1 to the Bleed Resist amount). Mechanical foes are immune to bleeding damage. Like Bio-Poison, bleeding damage is rolled as a weighted die. Due to the smaller maximum per-application bleed damage die, bleeding resist is extremely effective at protecting from this damage.

Head trauma, shock and panic all fall under the banner of Stun effects. When stunned, a percentage will be displayed by the character's head. This indicates the chance that the character will lose their turn, preventing them from taking an action immediately and draining 12 initiative. This initiative loss can cause the initiative penalty the subsequent combat round should it lower initiative to -10 or -11. The percentage chance to lose an action from stun is capped at 75%.

Stealth is a beneficial status effect, one which allows stealthy characters like Spies and Snipers to use powerful stealth attacks. This status effect lasts for a number of turns depending on the Talent used, and boosts Evasion and critical chance for the character. Certain talents will break stealth upon use (when they state they will). All multi-target attacks will break stealth as well.

Pinning prevents a character from moving himself or herself to different positions either through talents or the move option. Pinned characters can still be moved by other friendly characters or hostile characters using talents that adjust position. Pinning (and forced movement) can be ignored by the Shock Trooper.